Volodymyr Zelenskyy understands the value of communicating clearly, of course he does. His law studies taught him to disseminate information with little or no ambiguity, and his work as an actor honed an ability to orate well. But it’s his talent as a comedian – a person who knows how words can be used to trigger a desired, positive response – that has the potential to instil hope in the citizens of Ukraine, motivate troops, and trigger the support of an international community.

That comedic talent depends on an understanding of or an intuitive grasp of psycholinguistics, the study of how the psyche responds to words. Not just spoken or written words, but every pattern we create as a meaningful response by, and inside, our brains. Most people’s minds work too quickly to break this down step by step on the fly, but comedians seem to have an intuitive talent for it – and yes, this involves Will Smith, Jimmy Carr, Chris Rock, and David Baddiel too. And this is all worth exploring because on the serious side, without the hot-takes from Twitter, it means comedians – like Zelenskyy – have an innate advantage when it comes to command.

Here’s the boring science bit. The bit that lets me say, “I do some of this for a living, I’m not just wanging on”. When comedians engage with an audience, the success or failure of that interaction depends on four things:

With no small amount of irony, if certain language triggers aren’t pulled the right way at the right time then the whole thing will explode in your face. Metaphors like this one are a surefire way to kill a career in comedy.

The ‘sine qua non’ of being a great comedian isn’t remembering a joke accurately, it’s learning how to predict the responses from an audience that’s about to hear the set-up and knowing which language is best suited to tell that joke in that moment. So, with that in mind, let’s combine those hot-takes.

A joke starts in your mind, but it gets interpreted by the minds of others. This is why Jimmy Carr went on to launch a well-articulated three-point safety net, explaining the comedic value of his career-ender (as he referred to it) – although the general rule is, if people are laughing before you explain the punchline then, trust me, they think you’re being funny. Conversely, it’s why Chris Rock and Will Smith were in a lose-lose situation. Smith’s most immediate reaction to Rock’s subtle and improper jibe, much shared, was an expression confirming the Philly mindset was attuned to “laugh at the comedian”. However, when Will Smith saw his wife’s expression a moment later, his mind recalibrated Chris Rock’s concept for a joke … re-examining the language … his response changed … and we all know what happened next.

But here’s the thing. Try this:

If David Baddiel – Jewish, smart thinker, adept user of language, very funny; not mutually exclusive concepts and important for the purposes of this hypothesis – if David Baddiel had taken Chris Rock’s concept for a joke (alopecia, linked to GI Jane shaving her head), and said, “Hey Jada, looking forward to Schindler’s List 2 … ” (linking instead to the cruel and inhumane treatment of Jewish citizens in the Second World War)  — would that have been worse? Justifiable, because it’s Baddiel? Equally as abhorrent? Funny?

You tell me. I have an opinion, and I ain’t sharin’ it here.

There is a point at which the power dynamic, infused in language, transfers from the orator to the listener. A good comedian understands this. He works it through in advance, viz-a-viz points 1, 2, and 3. Truth is, Will Smith would have had even more impact if he’d used the power of language to remove the threat from Chris Rock’s performance completely. Walk up to the mic and say, “Man, you used to be funny.” 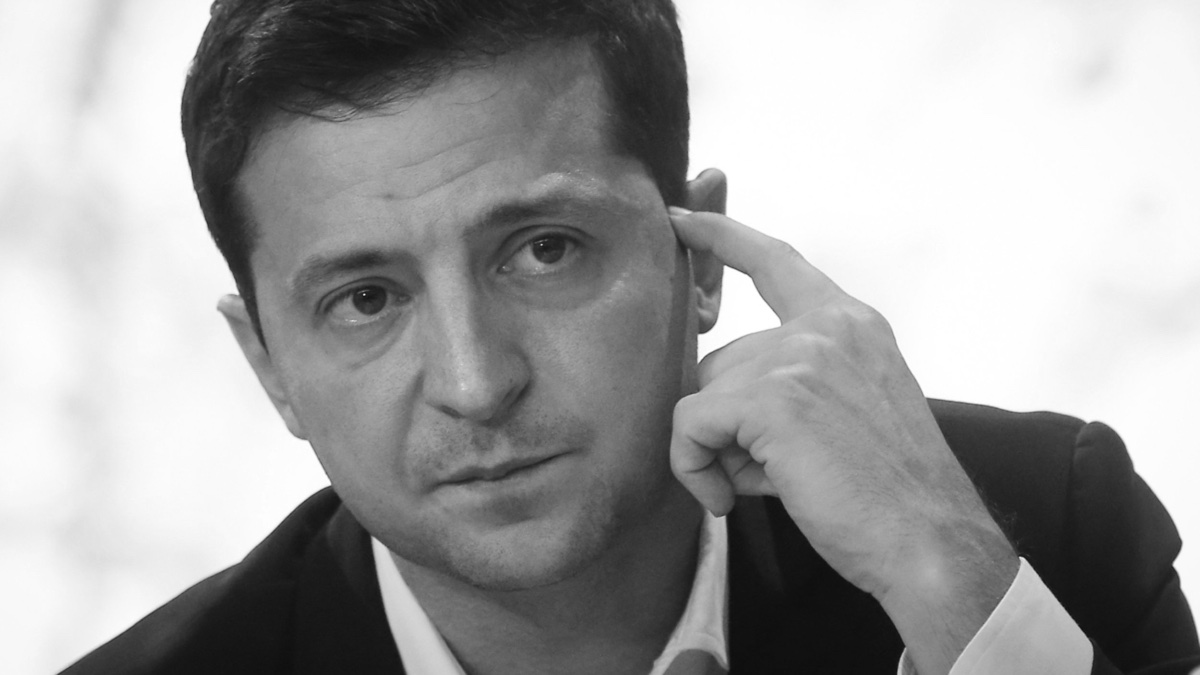 Zelenskyy is doing this: he’s using language as a weapon. He’s communicating at a pace that’s unheard of, in spin circles and news cycles that are oscillating at a pace unseen before, and he’s doing what he’s doing with humour, on purpose. In response, hot-takes Twitter is the new ‘power to the people!’ (Smith, W. 1977–1980).

The political or mainstream media machinations that drive a war machine are so complex, traditional narratives may be counterproductive. Amidst the noise, true purpose and meaning get lost in a delivery. Rather, the ability to use humour for achieving clarity among diverse audiences; to overcome the barriers of a multilingual world; to become a beacon of simplified logic in the mire (I nearly said fog) of illogical reasons for hesitating to show international support… well, that’s a powerful thing. And yes, that’s a lot of words. They may even obfuscate my point, so let me unpack this a bit.

Humour stimulates psychological processes at a fundamental and primitively preferable level. Comparative studies of persuasive effects surface an unsurprising conclusion – when we’re exposed to concepts that represent humour or fear, normal human beings are far more attracted to things that don’t threaten their survival (let’s leave Will out of this for a moment). Humour usually appeals. Fear does not. Comedy humanises us, it removes the threat of us being a threat – which, for Zelenskyy (let’s focus for a moment), is an ongoing challenge.

His election as president in 2019 wasn’t due to the electorate preferring his well-rounded policy platform. It was a statement of conviction: “we believe the man who understands our problems, can probably do the job”.

When comedy lands well, the net effect is affirmative persuasion. Chemicals mix, reactions manifest; we chuckle, we laugh, we occasionally pee our pants – the target audience’s view changes and the joke moves people into a more positive mindset. A good comedian can use the mood of an audience to trigger certain reactions – but once a joke is out in the wild, it takes a greater comedian to keep the momentum up, riff freely, and still be funny. You can prep all you like, but if you can’t communicate really well then the joke’s on you.

Zelenskyy knows this. Deep down, he knows that if his enemy is deploying fear as a motivator, humour is by far the stronger tool. Delivered well, comedy empowers implicit command over a target audience – but deliver a one-liner badly, and the joke’s on you.

Even if it’s an intuitive level of reasoning on his part, Zelenskyy knows that if you can make people laugh, you can probably also make ‘em cry God for Harry, England and Sviatyi Yurii.

Much will be made of life imitating art in history books of the future. If you haven’t watched the first episode of Servant of the People, I’d recommend it. Not for the humour, the script or even the acting talent – but for its ability, in multiple flashbacks over less than 30 minutes, to be an utterly convincing lens through which to see how a normal person could become a likeable, honest, transparent and purposeful politician. Ghenkis Khan, king of the one-liners? Not really. Fidel Castro, man of quick-wit? Nah. But Zelenskyy – the man who would be President, actually becoming President? Woah. Imagine a British comedian going from primetime to being Prime Minister. I mean, the one we’ve got is an utter joke, but that buffoonery is a clever, purposeful, and permanent manifestation of dead-cat theory … and I’m in danger of going off on one, here.

Zelenskyy understands the power of humour. He also understands how to construct rhetorical statements, by which, no, I don’t mean sentences or paragraphs or phrases that require no response. Rather, I’m referring to statements that exude ethos, pathos, and logos by the gopping bucket-load. His turns of apposite phrase are intentionally crafted to resonate, and be memorable, and to be highly shareable too – go on, check how many characters there are in each parliament-facing, key soundbite – and when the US offered to evacuate him and he retorted, “I need ammunition, not a ride…” … I’m willing to bet that wasn’t all ex tempore talent. Prep helps.

The Ukrainian president is shaping modern doctrine by drawing from the rules of satire and comedy, and controlling at least some parts of the mediated narrative in a way Wikipedia will one day confirm, is sublime.

He knows human beings interpret humour relatively consistently, too, without the need for articulated language cues. Comedy transcends traditional delivery of language – it is more memorable, it is more shareable, it is infinitely more memorable. And that’s comedic effect, right there. The only thing more powerful than words, when you’re trying to be persuasive with langua-TIMING.

Remember Zelenskyy’s response to Putin’s briefing against a green screen? Where the Russian’s hand had wafted through a projected microphone stalk, undermining his integrity? The Ukrainian knew a tiny clip of a microphone being overtly touched, demonstrably, would have a huge impact. He certainly grasps the importance of using platform-friendly content to land every message – he’d been an advocate for politics by Instagram long before Putin’s troops started painting letter-zeds, willy-nilly.

[Why ‘z’, by the way? Why that letter, not an ‘a’ or a ‘1’, for example? There’s more than one theory doing the rounds. The Z might be an abbreviation of ‘zapad’, meaning ‘west’. It might be a determinant signal, signifying Z- for Zelenskyy. It might be Russian shorthand for ‘за победу’, which, when it’s romanised, transliterates as ‘za pobedu’ or ‘for victory’ – that was the Russian Ministry of Defence’s version of the truth, anyway – or it could be as simple as ‘splash some paint on, Igor … oh that looks like a ‘z’, well, you’d better do them all like that’. I’m not sure Russian archives will ever reveal truths of that nature.]

The double-y I’m putting into Zelenskyy’s name is also not a mistake. I’m not doing it to be funny. Much has been made of the mainstream media’s decision to use ‘Kyiv’, the English transliteration of the Ukrainian word for the nation’s capital, rather than “Kiev”, based on Russian spelling. I’m not sure how Mussorgsky would feel about that, and vociferous debates about the Great Gate will endure long after the last notes of Pictures at an Exhibition fade away, but if you look at Zelenskyy’s passport? Double-y. And his Twitter handle? @zelenskyyua, the u-a- being the standard suffix for Ukraine, online.

One might even conclude, Zelenskyy understands a double-yy is a distinct and purposeful use of language that’s worth talking about. It’s quite a thing. In the hubbub of soundbites, against a backdrop of social media snippets  that may Rock your world but Will become yesterday’s news … wise up. He’s focussing on language and choosing humour, and that makes his position in our timeline far more positive – for the right reasons, more memorable.

No comments to show.